I was in New York City on March 1, 2020 when the news reported that the first positive case of COVID-19 had been identified in that state. A pharmaceutical company seeking accelerated approval for one of their products had selected PROMETRIKA to re-monitor their study’s efficacy data after a recommendation from the European Medicines Agency. I ended up traveling to NYC on short notice after learning about an urgent need for a monitoring visit at one of the oldest and largest teaching hospitals in the United States.

While leading a two-day monitoring visit at that hospital, it was announced that a coronavirus patient had been admitted to their emergency room for the first time. The research staff in my vicinity were anxious about this invisible, contagious, mystery virus, and it had just been confirmed that their colleagues were interacting with a patient that had been exposed to it. I walked back to the hotel that night and didn’t think anything of it when the song, “The Only Living Boy in New York” came up at random on my playlist.

I returned to the same site nine days later with hopes of performing a visit that would complete the review when I witnessed an evacuation just short of an exodus. I waited in the area where I was supposed to meet my point of contact but they never arrived. Eventually I resolved to make my way to the same desk I sat at during the previous visit. There were no other visiting Clinical Research Associates on site that day. Eventually someone did interact with me but it would soon become clear that they were preoccupied with questions of their own. Throughout the course of the day I witnessed the staff around me overwhelm their IT department with an inundation of remote access requests. It became clear that there would be fewer people in that office in the immediate future. The air was filled that day with a mix of chatter from people self-diagnosing each other and the sounds of Muzak pouring through their speaker phones while they patiently waited on hold. Where were you when you learned people in your office weren’t returning on Monday? I was a visitor in a hospital in another state when they received their news.

“We’re all in this together.”

That day, other sites I work with started emailing me cancelation notices for in-person visits.

The site I was at had implemented a policy to restrict visitors by the end of the day. Originally, I was scheduled to return to the site the following Monday to officially finish the visit; but instead, I never returned. Two weeks after that day, I saw frontline workers from that hospital on the news wearing trash bags in place of safety gear, and overwhelmed by the coronavirus surge. It started with one patient at that site in early March, but quickly increased to so many that their entire health system struggled to find the neseccary resources and equipment needed to help them all. Life moves pretty fast sometimes.

I found myself checking in with all the sites I worked with just to take stock. With many research site staff being forced to work from home for the first time, there were some basic questions that needed to be asked. Were those staff still able to be in communication with the sponsor? Could patients still get study drug and receive the tests required per protocol? Were site staff able to contact their patients by phone or video chat to review adverse events? Some sites were forced to close studies for an undetermined amount of time. Other sites were understandably forced to dedicate all their time and attention to COVID-19 studies.

I never again worked with the study staff that I met in March at that New York City visit.

When I reached out to those Clinical Research Coordinators I found that they were no longer there. Eventually I was able to get through to their mangers and find the contact information for the new people taking over their responsibilities. This wasn’t the only site I encountered where a staff change had occurred. Not every site initially offered remote visits before the pandemic but the coronavirus forced their hand. While I was onsite in New York City, I witnessed many site staff receiving their remote access for the first time, but this particular site didn’t make that option available to outside CRAs until a couple of months later. I had to sign confidentiality statements, scan both sides of my driver’s license, create a profile, be assigned a network account, get VPN, download Citrix, be assigned a hospital username, wait for a login ID, create a password, and set up an app on my phone. In addition to the usual preparation that needs to be done before a visit, this one included hours of work on the phone with IT just to have the right tools.

I’d be lying if I said I didn’t think this would be all over in a month. At that time, I couldn’t imagine things not going back to normal in a couple of weeks, but I wasn’t even able to schedule a remote visit there until late June 2020. On the day of the visit I encountered a deluge of technical problems that proved too great to initially overcome. After all the work leading up to the visit, I ended up spending weeks following up about technical problems. First it was with the immediate study team but eventually it resulted in open tickets with the site’s IT, medical records department, Citrix team, and electronic medical records software group. Each of them claimed the problems were the responsibility of the other groups regardless of how many times I called back and escalated the issue. It always seemed like the problems fell just outside of their department’s responsibilities. Eventually a breakthrough came after tying all those groups into emails and calls about these problems so that they could deliberate them in front of me. The visit wasn’t successfully completed until the end of July. All things considered it roughly took four months to complete the final day of that visit originally scheduled for March.

When I look at my personal calendar from last March I see a collection of plans that were derailed due to something I could not foresee at that time. Drug and device companies have had this revelation too. Many of them had study timelines in place that they were not able to keep. In place of meeting their milestones, they’ve had to work with their partners just to find a way to carry on. The industry has exercised more leniency with hospital staff this year as we all look for ways to pick up where we left off. I’ve really been taken aback by the degree of responsiveness that healthcare workers have offered the research world. In situations where they have fallen short of the high expectations those sponsors ask for, I’m proud of the understanding and support that the industry has been able to offer. I can’t express the amount of gratitude that I have for the frontline workers that did their best to carry on their usual responsibilities and take care of their own friends and families, while all along striving to help the sickest patients that were brought to their intensive care units. As I reflect now, I just want to take a minute to say thank you for your service.

“I can’t express the amount of gratitude that I have for the frontline workers that did their best to carry on their usual responsibilities and take care of their own friends and families, while all along striving to help the sickest patients that were brought to their intensive care units. As I reflect now, I just want to take a minute to say thank you for your service.”

The whole world is waiting to see what happens next with the coronavirus pandemic.

I think telecommuting will continue to be an option for research workers who were not previously able to incorporate it. I can imagine research staff from the hospital continuing to work from home regularly, even if it is just for one day each week; but at the least, telecommuting has to be a required back-up option now instead of a privilege. I’ve heard there are research facilities that have discussed no longer hosting Clinical Research Associates in person even after the pandemic ends, but I can’t point to a site that has actually made this decision yet. There could be some advantages to continuing to be all remote, but I believe the disadvantages for hospitals that exercised this would far outweigh the benefits. Still, people across the globe are receiving the vaccine as it becomes available to them and that is a sign of progress. In the US, each state is moving through phases and taking steps toward reopening businesses, which is also positive. However, at the time of this writing, most regions of the world are seeing an increase in new COVID-19 cases. As the temperatures in the northern hemisphere begin to increase again it is hard to ignore the talk about the possibility of there being another wave of infections.

None of us can say what will happen next but I’ve decided to watch with an open mind instead of trying to guess. It is hard for me to believe that it has been a year, but it has been. This has been an unusual time that has required many to be outside of their individual comfort zones. Last month, people started referring to March 11, 2020 as the day that everything changed. It seems that this has been pinpointed as the beginning of “the new normal”; the time when many of us started working and learning from home. This is the instant where wearing masks became part of our routine. Since then a lot has changed. Tom Hanks no longer is the only recognizable person to have contracted the coronavirus because so many of our friends and families closer to home have been impacted. If you know someone that has been affected, or would like to share your own story, I encourage you to reply in the comment section of PROMETRIKA’s website.

We’re all in this together.

Read Part 2 of this series 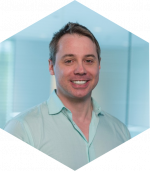 Stephen has more than 14 years of clinical operations experience as a versatile monitor and manager in the pharmaceutical Industry.